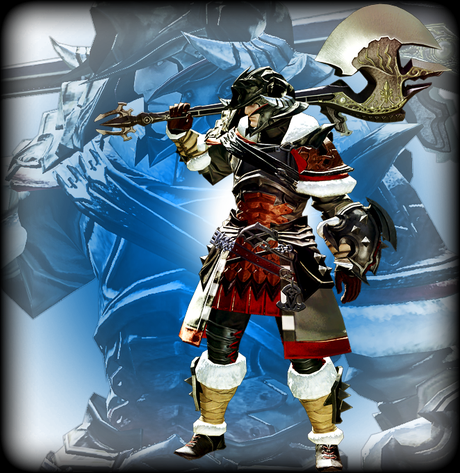 On the northernmost edge of Abalathia’s Spine exists a mountain tribe renowned for producing fearsome mercenaries. Wielding greataxes and known as warriors, these men and women learn to harness their inner-beasts and translate that power to unbridled savagery on the battlefield.

In former times which saw war waged ceaselessly in Eorzea, the warriors featured prominently on the frontlines of battle. With the arrival of peacetime, however, their art has descended into the shadows of obscurity, where it remains to this day.
Combat Role

Warriors have the honor of possessing the highest HP of any class or job. Thriving on the enmity of his foes, there is no fiercer fighter on the field of battle.

They are front line damage dealers, fearing nothing as they swing their mighty great axes down upon foes. Their damage is high and consistent while also featuring sturdy armor and plenty of health to absorb the blows of enemies if the need arises.

Requirements:
Level 30 Marauder and level 15 Gladiator.
As a marauder, talk to Neale of the Astalicia (Marauders’ Guild), located in the Limsa Lominsa Lower Decks (4,7). Complete the job quest “Pride and Duty (Will Take You from the Mountain),” and receive the Soul of the Warrior.