The package includes a set of beautiful character class illustrations by Lead Character Designer Akihiko Yoshida conveniently sized to fit as wallpapers for the major cellphone Operating Systems. In addition to that we also get a few twitter icons representing some of the minions available in the game.

You can pick your class and size (or minion) in the gallery below.

With the Phase 3 closed beta drawing to a close, my Lalafell Lancer reached the dizzying heights of level 25 in Final Fantasy XIV: A Realm Reborn. Version 1.0 of this game was, to put it politely, a mediocre experience at best with several elements puzzlingly difficult to the point of agonising trials with so many broken mechanics. In 2011, Yoichi Wada, the then CEO of Square Enix, openly admitted that the failures in Final Fantasy XIV tarnished the Final Fantasy franchise; the game was simply not ready for prime time. To that end, FF XIV was given a massive overhaul to produce something that Final Fantasy fans have been longing for. With A Realm Reborn, the game world has been changed so drastically that it can barely be recognised but the changes are a welcome one.

I was pleasantly surprised by how many Final Fantasy fans wanted to give this another crack of the whip. Squeenix knows that failure is not an option, there are only so many second chances. Upon stepping into the world of Eorzea once again, it is immediately apparent that this time around, they have put their heart and soul into the project. From the towering cityscapes of Limsa Lominsa to the arid desolation surrounding Ul’dah, Eorzea looks stunning. The devil is in the details and the producers have certainly delivered. What’s more, 1.0 characters will be imported into Phase 4 Open Beta and beyond, carrying on your progress from where you left off including your Gil accumulation and items. Some legacy objects such as tools, weapons or armour may not function correctly in the new build, but these can be discarded since the stats for all objects have changed. It is worth noting that all progress from Phase 4 onwards will be kept, unlike the previous wipes from closed beta phases.

The backdrop story begins with an event called The Calamity, whereby the world of Eorzea was destroyed and rebuilt. In real terms, this was when Square Enix pressed Alt F4 on the game and started from scratch. There are now new threats on the horizon, and it’s up to adventurers like you to take on these challenges. Everything here is new. New game engine,

new story, new interface, improved server capability, new everything. The new server side features incorporates cross-platform PS3 and PC players that can play together in any realm they choose. It works rather well and I was impressed with how transparent the experience was. In terms of the interface, some tweaks need to made in terms of sizing. On the PS3 is takes up too much space, while for PC owners like myself who have 2560 x 1440 resolution monitors, the UI is too small. It is highly customisable however in terms of positioning and some text sizing, but some overall sizing flexibility would be welcomed.

The game itself plays beautifully. It feels and sounds like a Final Fantasy game; the orchestral pieces accompanying each area is reminiscent of every Final Fantasy you have ever played… well it would be considering one of the composers for the game was Nobuo Uematsu. On top of your normal Leves (quests), there are also on-the-fly missions known as FATE. Similar to how Guild Wars 2 works, FATEs can be activated by talking to NPCs and any player within the vicinity can take part. It’s an interesting way to play, as it will attract random players to work together to complete each FATE mission. Some FATE missions are quite engaging, such as defending Highbridge from beasties,

only to find there was an Act II whereby you went to the monster’s lair to finish them off! In terms of instances, they form part of your Duty list and certain dungeons can only be unlocked via quest activation.

The Duty feature itself is convenient to use; you can add yourself to any instance queue and carry on questing around Eorzea until a group has been formed. Groups are assembled across realms automatically if you have not formed a party yourself, thereby negating the need to hunt down a healer or a tank before readying up. I absolutely love this system and it takes away a lot of stress especially when playing solo. The three dungeons I got to play were Tam Tara Deepcroft, Satasha and Copperbell Mines. All these are classed as “Light” parties, I.E: only four players are needed for these dungeons. A full party would consist of eight or more players. These dungeons were rather challenging, with plenty of loot to collect and final bosses to defeat. Without spoiling too much, they are a lot of fun even with strangers.

You will be pleased to know that the Market has been redone entirely (thank god). In 1.0, selling items was a painful experience. The need to hire a retainer to sell your wares and then having to click on each, and every, retainer just to see what was being sold was nightmarish. The Market can now be searched and listed based on various categories such as character class, weapons, materials and so on.

Retainers are still used for selling once instructed to do so, and he/she can also keep your items and Gil safe. Think of Retainers as a safety deposit box. There are many forms of transport to not only find different markets in each city, but also the location of class guilds. Every city has a different set of class guilds, which was why my Lancer is a resident of Gridania where the Lancer guild is. If you want to join other guilds, you will need to travel to the appropriate city to do so. Travel however is eased via Chocobos hires, the airship which is unlocked later on and Aetheryte teleportation once an Aetheryte has been visited. Of course, the easiest way is to get your own Chocobo whistle via collecting Grand Company seals to complete that particular quest. Each city has a Grand Company that can be joined during the main quest chain, these provide benefits to members but you can also create a Free Company of your own which is essentially your own guild.

The surface has only been scratched in this article and the game has so much to offer. Yes there will eventually be a paid subscription and yes there are plenty of Free to Play alternatives that would make you drown with choice. But the key here is this, if you want a faithful representation of a Final Fantasy universe that is incredibly fun to play, then this is it. There’s even an area called Costa del Sol for heaven’s sake! Since all the closed betas, the addiction within me has been growing ever since and I for one cannot wait for the open beta to arrive. The option to enhance your character further via Jobs means that my standard Lancer can turn into the epic looking Dragoon which is enough for me to keep on playing. The jury is still out until the full release, such as economy balance and how well crafting can generate income. But I’ve not had this much fun in an MMO in a very long time. Did I mention you get to fight Ifrit? Awesome right? 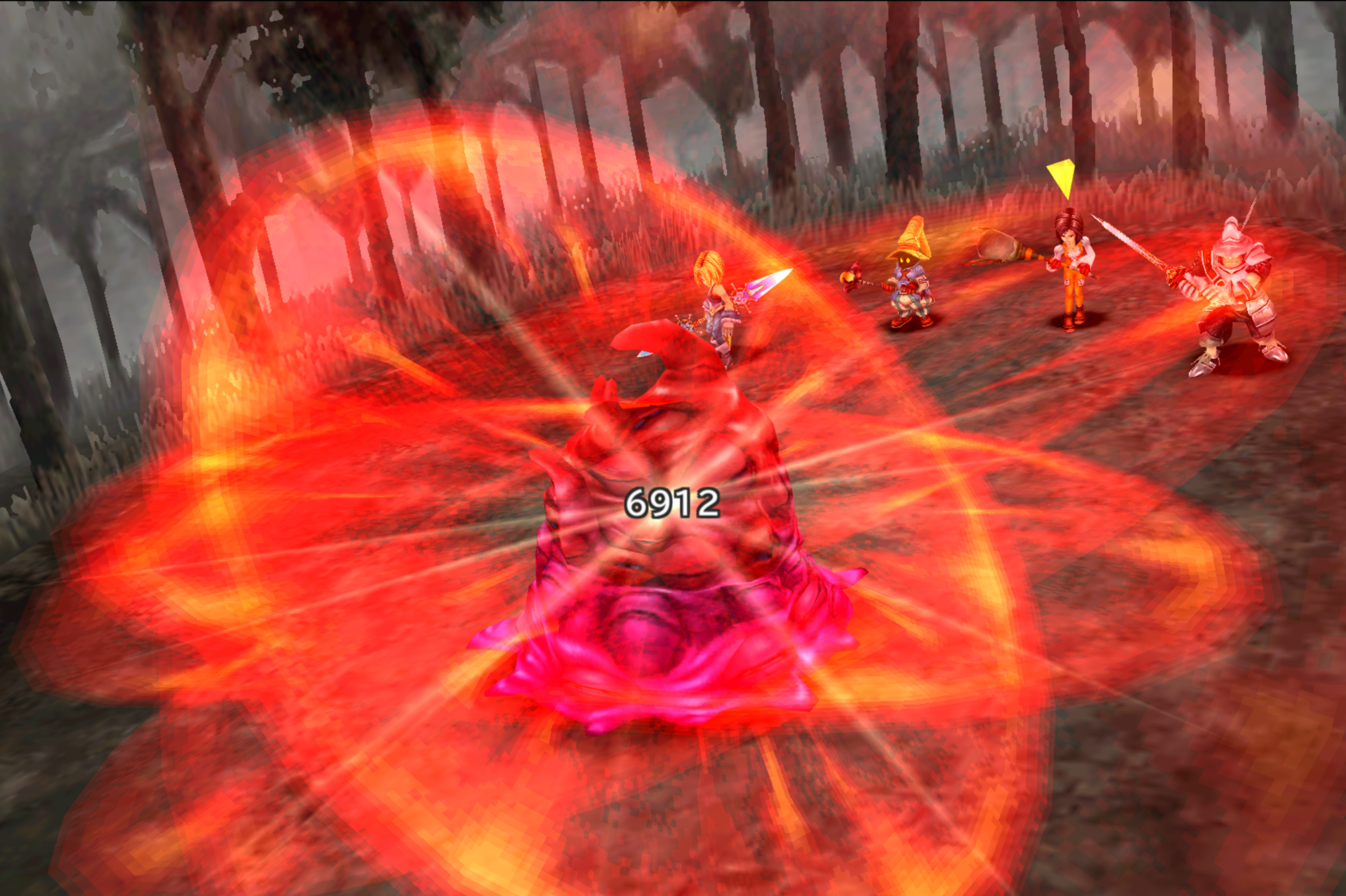 “A limit skill that inflicts damage commensurate with the damage the target has already suffered.”
—Description, Final Fantasy Tactics.
Climhazzard (クライムハザード, Kuraimu Hazādo?) is a recurring attack mainly used by the Knight class, though it originated as a Limit Break for Cloud Strife in Final Fantasy VII. Its appearances are almost directly related to the appearance of the character himself.

ClimhazzardClimhazzard makes its debut as a Limit Break for Cloud. It is the second LEVEL 2 Limit Break, learned after using Blade Beam seven times. It inflicts 4.375 times damage more than normal to a single opponent.

Final Fantasy VII: Advent Children/Advent Children Complete
Cloud uses this ability in the movie with the help of his friends to defeat Bahamut SIN.

Final Fantasy
Climhazzard is a skill in Beatrix’s Seiken and Steiner’s Sword Arts skillsets that deals major non-elemental damage to all enemies, dealing twice as much damage as normal physical attack. It costs 32 MP to use, takes 70 AP to learn, and it is learned from either Excalibur or Excalibur II. The damage of the attack increases as the character’s Spirit stat increases. The skill is magical in nature and will take on the element of the equipped weapon.

An ability called Climhazzard is available to Beatrix during the final boss fight with her. Instead of dealing major physical damage based on her attack power, it reduces the entire party’s HP to 1.

Final Fantasy Tactics
Climhazzard is a Limit Break for Soldier, better known as Cloud, and can only be used if he is equipped with the Materia Blade. It inflicts damage to the target equal to the total amount of damage the target has already taken, has a range of 2, effect of 1, and speed of 15. It takes 450 JP to master.

Dissidia Final Fantasy
Climhazzard returns as a Bravery attack for Cloud, which can only be used on the ground. Cloud charges forward to stab the opponent, then leaps into the air and slams them into the ground. It takes 120 AP to master and can be equipped for 30 CP. Cloud knows Climhazzard initially.

Both parts of Climhazzard can also be used by Bartz. The charging stab is the first half of Climbarrel, mixing it with Squall’s Solid Barrel attack, and overhead slam is the second part of Slidehazzard, which combines it with Tidus’s Full Slide.

Climhazzard returns with better range and tracking, but cannot be dodge canceled. Both Climbarrel and Slidehazzard are gone from Bartz’s repertoire. The first half of Climhazzard is instead mixed with Tifa’s Beat Rush to form Hazard Raid. Bartz no longer uses the second half of Climhazzard in any way.

Climhazzard is a Legend ability used by Cloud.

Dragon (竜技, Ryūgi, or ドラゴン, Doragon?), also called Dragon Tech, Dragon Soul, and Dragon Arts, is a recurring ability in the Final Fantasy series associated with the Dragoon Job. Among the abilities that compose it are elemental dragon breath abilities and the trademark Dragoon abilities Jump and Lancet.

Appearances
Final Fantasy IX
Dragon is Freya’s skillset. Her Dragon skills are not considered magic, and thus can be used when magic-use is blocked, such as when the party is first sent to the Forgotten Continent and enter the anti-magic field within Oeilvert. 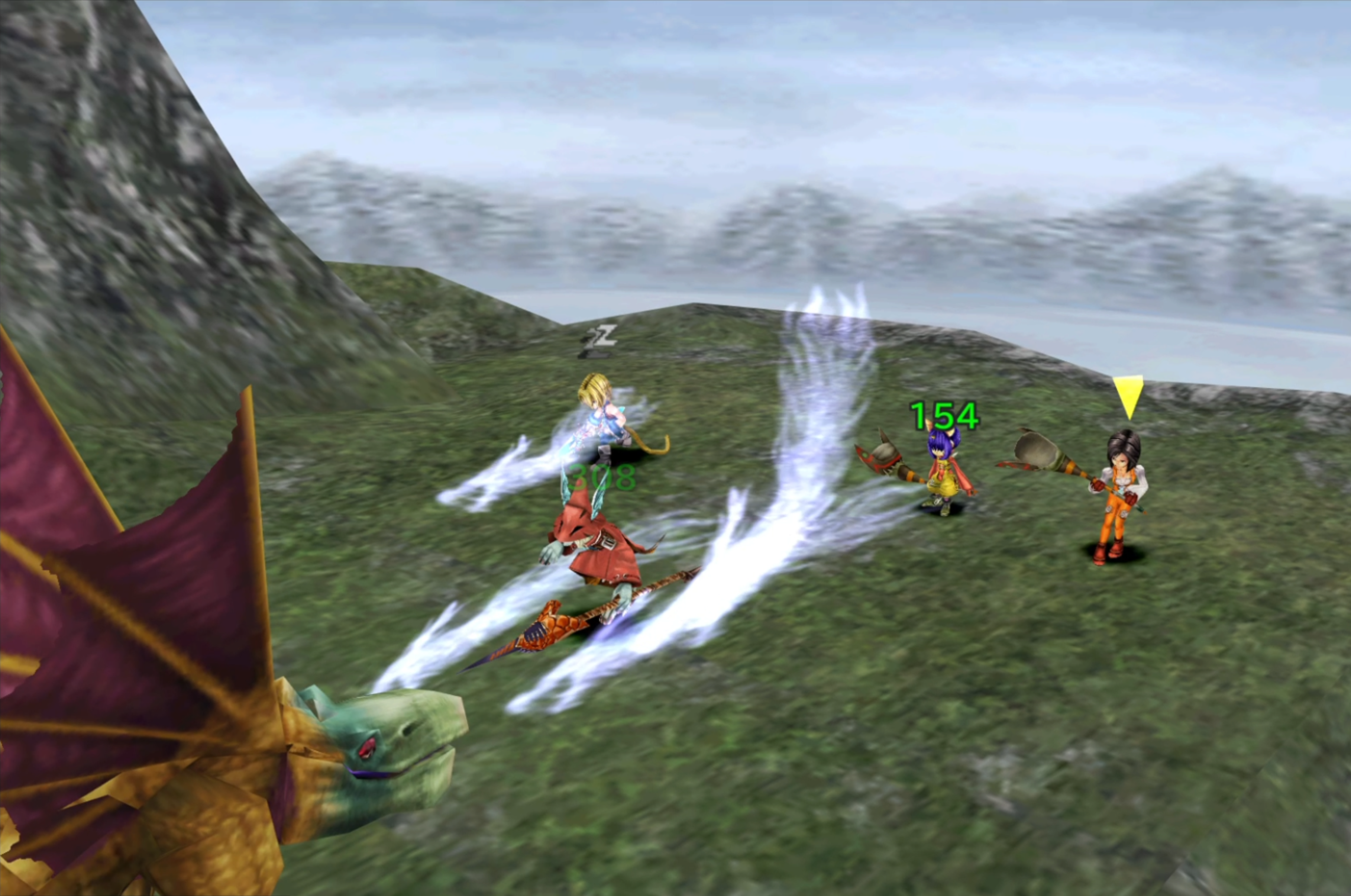 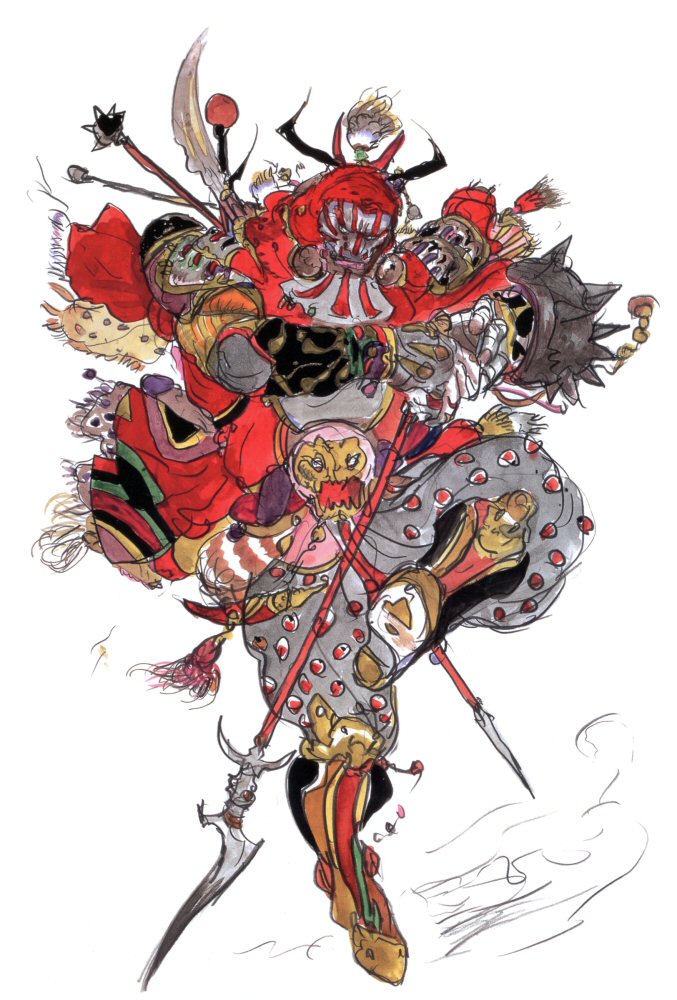 “Enough expository banter! Now we fight like men! And ladies! And ladies who dress like men! For Gilgamesh…it is morphing time!”
—Gilgamesh, Final Fantasy V
Gilgamesh (ギルガメッシュ, Girugamesshu?) is a recurring character in the Final Fantasy series. Initially introduced as a minor villain, he has made a number of appearances in remakes and later titles. To date, Gilgamesh has had more appearances in any Final Fantasy media than any other character, and may be the only character to appear in more than one game in the main series (see below). Gilgamesh began a tradition of an incompetent, comical, yet persistent recurring boss for the player to face.

Gilgamesh’s role has varied greatly, from ally, to enemy, to summon, but for most of his appearances he is a traveling sword collector that battles with a variety of rare and powerful weapons. In most, if not all, of his appearances, Gilgamesh is searching for the legendary sword, Excalibur. Another of Gilgamesh’s trademarks is Genji Equipment, which can be stolen from or dropped by him.